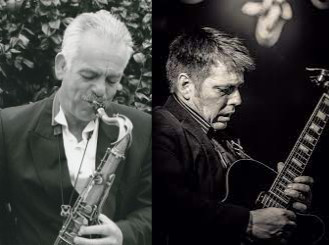 Martin Dale is one of the busiest and most popular saxophonists in the South West.

Martin has recorded for the BBC on radio and television sound tracks. To date he has released 8 CDs which have been played on both Radio 2,3 and Jazz FM. He makes regular appearances at UK Jazz festivals, where he has performed with Lee Gibson, Alan Barnes, and Mark Nightingale.

Over a career spanning more than 25 years, award winning jazz guitarist Nigel Price has become widely acknowledged as one of the hardest working musicians in the business.

Musically, his blend of flowing bebop lines, deep blues sensibility and his mastery of chording continue to delight audiences and fellow musicians alike. His career highlights include a support show for Gladys Knight at The Royal Albert Hall and an appearance on Van Morrison’s recent album Keep Me Singing.

Starting his professional career in his early 20s, Nigel toured Europe with various reggae and funk bands before settling on a solo guitar career and turning his attention to jazz. Citing early influences as Wes Montgomery, Joe Pass, John McLaughlin and the Mahavishnu Orchestra, Nigel honed his craft by attending gigs and sitting in with the players of the time.